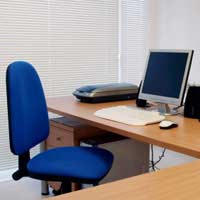 John Elgin is one of the directors of an established, family run business. When John and his fellow directors expanded the company and created a new admin section, they were keen to provide staff with an element of privacy.

“We were setting up an office in a new building, so this gave us a great advantage. We wanted an open plan work area to promote staff interaction, but we hoped to combine this with privacy.

“As a result, we gave each member of staff a workstation set at an angle rather than in a line. We also installed 1.6 metre high partitions between each workstation.

“We invited comments about this arrangement from some of our existing staff. The response was favourable. All of them in fact said they preferred the layout to our current office, which was cramped and noisy.

“Giving privacy to employees isn’t just about partitions and angled workstations, however. At one end of the new premises, we built a separate staffroom. Here we set up tables, soft chairs, and basic kitchen facilities.

“Following a suggestion from one of the staff, we also arranged for individual lockers in the staffroom. These meant that employees could store personal effects, coats, bags, winter boots, and so on, without cluttering their workstations. The lockers also provided a measure of personal security and confidentiality.

Phone and Internet Use

“We already had a company privacy policy but decided to update it. Two of the areas we clarified were phone and Internet use.

“In my view, it’s unreasonable not to allow employees to make or receive an occasional private phone call. After all, we have lives outside work. We ask staff to keep such calls short and to a minimum, however.

“We also said that employees who want privacy for a phone call could use the staffroom. We put a phone in here for such use. Anyone can also take a mobile phone outside the building.

“As for the Internet, we frown on sending and receiving personal emails at work. Web browsing is fine as long as staff restrict it to breaks. We don’t allow online gambling, though, or the viewing of pornography.

“We also discourage employees using our network for online banking. Our systems administrator has told us there are privacy and security issues related to this.

“We didn’t want to install CCTV in the office. This would give the wrong impression to staff. In fact, we couldn’t think of one reason to justify it.

“On a more positive note, we reviewed our security systems for the retention and maintenance of employees’ personal information. As a company, we respect employee confidentiality. This applies as much to basic staff information such as home addresses, as it does to banking details for salary payments.

“We were satisfied that the security systems in place were more than adequate. To put minds at rest, we outlined these systems to the staff at a meeting.

“Once we moved into the new office, we asked the staff if we could change anything about the office for the better. We had some useful comments that we acted on. The result, I hope, is an efficient, friendly office.”